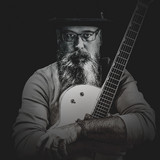 The son of a motorcycle racer from a small town in west Texas, Chris Beall is a singer/songwriter/producer/guitarist who's albums have been featured on numerous Americana radio/music charts. Along with his solo career, he is a member of the well-established South Austin Moonlighters whose album “Travel Light” went to #1 on the Alternative Country Roots Radio Report in 2019 and reached #61 on the national Americana radio chart. His previous solo album in 2014, "The Gin Mill Hymns", showed-up at #15 on the Texas Roots Radio chart, #29 on the national Roots Rock Radio chart, and #173 on the national Americana radio chart. He has achieved the #1 position on the Reverbnation Americana chart for Central Texas several times, and #3 in the nation. Influenced by many forms of American music, he did a stint in Nashville, but currently resides in Austin Texas where he writes, performs, and produces music. Chris has also produced and played on several Texas artists' songs including Denny Herrin's "Robert E Lee Motel" and Brett Hauser's "I'm As Good As Gone". His discography as an artist includes multiple albums: 2010's