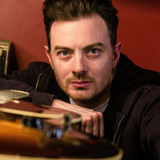 Hal Leonard, the biggest editor of sheet music and music books in the world, has recently included Jordan Officer amongst the greats in Scott Yanow’s publication “The Great Jazz Guitarists, The Ultimate Guide.” Jordan Officer the musician, composer, singer and producer has carved out his signature sound which is unmistakable whether he is backing up another singer or playing solo, and whether he is singing the blues, jazz, country, or rock’n’roll. And his live shows are unforgettable and mesmerizing, for his energy and originality, for his openness and for the tangible complicity between Jordan and his band members. In 1997, Jordan Officer met Susie Arioli and a solid bond was formed between the two musicians and the Susie Arioli Band featuring Jordan Officer was born. In 2010, he released his first solo, self-titled album, which earned him the Félix “Album of the year – Jazz Creation”. In 2014, he released “I’m Free”, after 6 months of studying and experimentation in New York City. In 2015, Jordan released “Blue Skies”, born of a month’s immersion in the musical energy of California’s west coast. Inspired by road trips in the southern United States, Jordan released ‘’Three Rivers” (produced by Charley Drayton) in 2018 and earned the Félix "Album of the year – Jazz". In 2020, Jordan Officer released a project he had dreamed of for a long time: a trilogy. Each album is dedicated to one of the three musical genres that forged him as a musician: jazz, blues & country.