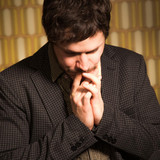 Effi is an electronic musician with the spirit of a poet, and a heart full of indie. A guy from Graz (Austria), charming and with the fresh london tune. And he plays ukulele! But above all he's probably one thing: the greatest talent in the Austrian indie-circus.  EFFi knows no genre. His sound is a mixture between cheerful electronic and guitar music. Some film directors used his tunes for Austrian and Italian movie soundtracks and songs are in heavy rotation on every good radio station.  EFFi was also touring through Germany, Russia, Latvia and Estonia and as a street musician with the french music group „Man du monde“ busking in New Zealand.  EFFi is Thomas Petritsch. The name EFFi comes from the literary character Effi Briest of the indentically named book of Theodor Fontane. But why EFFi? Well, here's the link:  „The character describes best a permanent state of inner disunity caused by social restraints and a childish naive romantic spirit of adventure. That sort of feeling is constantly surrounding me“.  He's autodidact and most of the many varying instruments on the album were played by himself during the recording sessions.