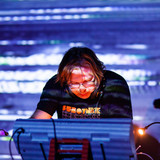 French native, Franck Martin draws his inspiration from the works of Jean-Michel Jarre, Vangelis, Tangerine Dream and also from various artists like Iannis Xenakis and Hughes Le Bars. His first album, released in 2016, is a timid exploration of the tools for Electronic Music Production. Some tracks are influenced by the years he spent in Fiji and in the Pacific Islands and were often composed during his travels. His second album, released in 2017, is a continuation of this exploration. It is drawing more from the avant-garde electronic music and modular synthesizer community of San Francisco and Berkeley, where he now resides. This community in itself is influenced by the instruments of Don Buchla and Dave Smith, but also by composers like Morton Subotnick and Suzanne Ciani. Franck Martin continues his exploration in the creation and production of electronic music, whilst meeting other fellow artists from San Francisco and the world (R Beny, m.0, Chris Otchy, Doug LynnerNathan Moody ..)   While Spotify is convenient to listen to music, consider supporting indie artists by buying their music on Bandcamp. Picture Credits: Jasmine Ali, Matt Biddulph, Marijana Novakovic, Franck Martin