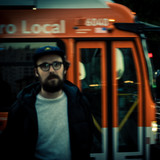 Rudi Maier (aka Burkini Beach) is a restless guy. He spent the last few years making bone-rattling indie-punk with his two-piece outfit, The Dope. Over that time the band has released two critically acclaimed albums and toured with Warpaint , Band Of Skulls and Cursive amongst many others. But that’s just one side of his musical coin. The other stems from his love of something more fragile, of quiet storytelling, tender melodies and the occasional pop hook. Maier started working as a producer and spent some time in London, where he came up with the first ideas for his solo project Burkini Beach. His debut album 'Supersadness Intl.' is a tale of sad goodbyes, relationships, self-doubt, mental illness and heartache. Maier is openly vulnerable and embarrassingly honest. While so many songwriters bemoan what once was, he seasons his songs with just the right amount of black humour.