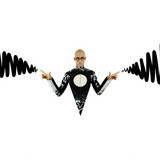 More than a decade into a very colourful career The Correspondents continue to surprise and astound with their genre-defying dance music and whirlwind live performances that have taken them round the world accruing an ever growing cult following. Since their first EP ‘What’s Happened to Soho’ and their debut album ‘Puppet Loosely Strung’ the Correspondents have honed their ability to take the listener on a journey through the genres while whole heartedly embracing a pop sensibility. Their 2017 album release ‘Foolishman’ sees this ethos in action with swung beats, funky synth arrangements and rolling baselines married to lyrics that lament, celebrate and lambast the deceit of politicians, the ebbs and flows of mental health and the perils of going out.

Their latest EP, ‘Who Knew’, is the same playful foray into very different sounds executed with candour and finesse. Whether it be an earnest up tempo love ballad reminiscent of the Cure or an explosive electro funk track about humanity’s high speed demise, they show that this is a band who create increasingly sophisticated music designed for the dance floor.