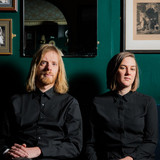 For Rough Trade Records founder Geoff Travis, Josienne and Ben’s 2014 album Nothing Can Bring Back The Hour quickly became his favourite record of the year. Bringing them to the label was a way of ensuring their unique music could continue to bloom and also reach a much wider set of ears. 'Overnight' was the duo’s first album to be released in the US, and the duo toured the States in the autumn of 2016. In an interview with The Guardian, Geoff described Josienne and Ben as “a sublime and important act.”   Despite being entirely self-financed, self-produced and self-arranged 2014’s Nothing Can Bring Back The Hour brought Josienne Clarke and Ben Walker an extraordinary and unexpected amount of attention. Their ovation-stirring rendition of the traditional ballad The Banks of The Sweet Primroses on BBC television prompted 6 Music DJ Cerys Matthews to invite them to appear in the 2015 revival of Timberlake Wertenbaker’s Our Country's Good at The National Theatre. Josienne and Ben were incredibly honoured (and not a little daunted) to perform two original compositions in the production.   Josienne Clarke and Ben Walker release their brand new album 'Seedlings All' on Rough Trade Records on March 23rd. They are touring Australia in March before returning to the UK for live dates in March and April.