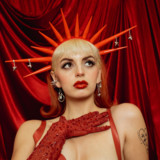 In 2011, a then 13-year-old Rebecca Black’s song “Friday” was viewed by over 150 million people worldwide and became the fastest-growing viral song and video in 2011, ranking No. 1 on YouTube, Billboard’s Heatseekers chart, and the Google Zeitgeist. Later that year, Rebecca's viral fame, positive attitude and charismatic personality landed her the surfboard for “Choice Web Star” at the Teen Choice Awards, a sketch performance at the VMA’s, and she completed the late night and daytime TV press circuit in the US.

Black continued her mainstream climb with a cameo in Katy Perry’s music video “Last Friday Night”, while “Friday” went on to be covered by such notables as Jimmy Fallon, Stephen Colbert, Justin Bieber, and Fox’s popular TV show, Glee.