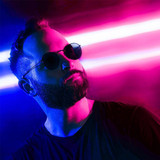 A mainstay in Tokyo's night club scene for over a decade, VIVID has held residences at Tokyo's most famous night clubs and opened for Top 100 DJs including Don Diablo, Showtek, Tujamo, Marshmello, Jay Hardway, Borgeous, Nervo, and many more! His reputation of energetic and fast pace mixing styles has earned him a following of VIVID fans know as the #Vsquad, who often join his shows putting their hands in the air in the shape of a “V.” In his small Tokyo studio, VIVID has worked effortlessly to create his own unique Future House Bass which has landed him releases on Showland Records (Armada), Future House Music, and more. Many of his tracks have earned him the support from some of the world’s biggest artists including Tiesto, Martin Garrix, Don Diablo, and so on. VIVID has released two official mix albums exclusively in Japan featuring Spinnin' Record’s top Future House and Future Bass hits. These mix albums reached the top 10 Album Charts in Japan and were followed by Japan promotional tours. Additionally, VIVID regularly tours Asia, spreading his unique sound through the eastern hemisphere. Highlights include a Chinese Tour hitting Playhouse Guiyang, SPACE Chengdu, and m1nt Shanghai. Followed by performances in Taipei at Elektro and several Seoul, South Korea nightclubs.