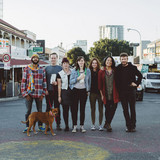 The Mouldy Lovers are a 7-piece band whose unique sound incorporates a range of genres including folk, punk, ska and world music. This blend of styles truly comes to life on stage, and it is the band’s live show that has earned them a reputation as one of Brisbane’s most high energy and exciting acts. Boasting a three piece horn section, drums, guitar, piano accordion and bass, The Mouldy Lovers have bombarded festival stages across Australia including Queensland Music Festival, Brisbane Festival, Falls Music and Arts Festival, Wallaby Creek Festival, Caloundra Music Festival, Island Vibe, Darwin Festival and more. Recently returning from Japan on their first international tour, the band are gearing up to head straight back out on the road for their biggest Australian tour to date. In celebration of their most recent release Boondock (due out mid-September) the seven piece will be performing up and down the east coast including Tasmania as well as Jungle Love, Island Vibe and Tablelands Festivals.