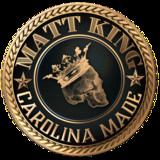 Singer/songwriter Matt King lives in a world of contrasts. One inhabited simultaneously by conspicuous consumption and creeping poverty, sprawling suburbs and decaying rural communities, by embattled corporate chieftains and quietly struggling workaday Americans. King walks a winding path between these extremes, bringing a photographer's eye to his vivid musical portraits. Yet his lens is not given to the cinematic fantasy and marketing hyperbole that has spilled into seemingly every corner of society. Rather, he strips away the artifice of contemporary culture to reveal what is, at times, a sobering reality. His perspective draws on the determination of Appalachian forebears who endured the iniquities of coal mines and timber companies, but with a broad vision that looks askance at agri-giants in the Plains states and mass merchants on Main Street. His music is rooted in this timeless struggle-an American tenor struck in different keys by Steinbeck, Guthrie, Dylan and John R. Cash. Even upon such formidable foundations, however, King is a solitary structure if for no other reason than the alarming absence of such sentiment in millennial American music."People sometimes make choices because they think they have no choice. "We back ourselves into corners, or we're backed into corners, and the decisions we make about what to do or believe...I'm interested in those decisions."