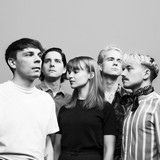 The Holy are a Finnish alternative rock band formed in Helsinki in 2014. They have been shaking the ground of the Nordic music scene since the release of their debut EP More Escher And Random Notes in 2016. Mixes of post-punk, Bruce Springsteen and Peter Gabriel with Krautrock influences are often mentioned when speaking about The Holy’s well crafted sound and songwriting. They are known for their highly explosive live shows and for the unusual band formation with two drummers who keep the pulse high at all times. The lead singer’s tense and timeless voice and the guitar loaded wall of sound often makes you feel comfortably uncomfortable.

The Holy have played over 100 shows including all major Finnish festivals and gigs across the Nordics and GSA. They have also showcased at Midem, Eurosonic, Iceland Airwaves, Reeperbahn, JaJaJa London, Berlin & Vienna. The German/French TV channel Arte filmed the band at Flow Festival 2019 in corporation with Finland’s YLE, and Seattle based KEXP filmed their show at Iceland Airwaves. The Holy’s debut album Daughter gathered praise both in Europe and Finland, resulting in an EMMA-nomination (Finnish Grammy) for Critics’ Choice in 2019. The reviews praised the honest songwriting and lyrical themes including topics such as the 1990s Finnish economic recession and its reflection on the youth of its time.