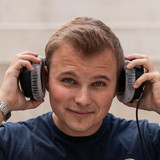 The imitation of playing the guitar with a plastic shovel in his first years of life was the sign for his parents to guide him carefully to the big world of music. So the five-year-old Benjamin started to play the guitar – first classic education, thereinafter more focused on pop music and electric guitar. Some years later coaching in drums, bass and keys followed. The first experiences in the fields of music production were gained by creating hip hop beats and other instrumentals in his children’s room. Finishing the A levels, he decided to deepen the process of music production and studied “Audio Production” (B.A.) and completed an audio engineering professional training in 2015/2016 as well. Continuing his academic career in London 2017/2018, Benjamin obtained an M.A. in “Arts Management”. Thereby he gained a deep insight into the creative industries’ environment and developed his management skills and knowledge with the focus on the music industry. Now he wants to wander through various projects and music genres, creating new songs and exploring the vastness of the music world.