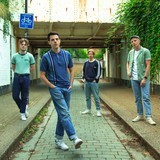 Featuring Out At Sea

OUT AT SEA are a London based indie-pop band made up of four university mates: Matt Chase (vocals/guitar), Mark Houston (vocals/guitar), Nick Gartland (keys) and Ben Cupit (drums). Three parts Liverpool FC, one part Man United, they bonded over their love for the game, 80s synth music, craft IPAs and indie rock bands.   Fully forming at the start of 2020 (the best and worst time to form a band), OUT AT SEA started releasing singles from their 'lockdown home studio', powered by endless zoom calls, voice notes and "I think this may be a silly idea" ideas. The lads have had the likes of Houdini blasted in Co-ops across the UK, and tracks from their debut EP Lie A Little EP aired by stations such as BBC Introducing Solent and Riverside Radio. After saving up their own pennies (and supported by a generous fan-lead Kickstarter), they headed to Strongroom Studios, recording Lucky It's Love in early July. The "summer anthem" became an instant hit with their dedicated following and beyond, and was shortly followed by the long-awaited release of Izzy - a singalong banger which they hope will be adopted by a football crowd at some point. Their headlining gig at O2 Academy2 Islington the week after was a lovely welcome back to live music, and you can catch them playing the Amersham Arms on 30th October for a sp00ky Halloween party. They're currently taking requests from anyone good at TikTok to blow them up as they have no idea how to use it. Peace x