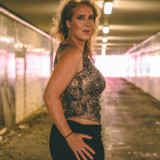 Cassady Southern grew up in a musical household in Victoria, with her father playing in pioneering rock bands in Melbourne during the 70s. She was brought up on a steady dose of blues and rock 'n' roll. Cassady released her first EP 'Don't ask me' in 2012. The EP contained 5 original tracks as well as a cover of Stones classic 'No Expectations'. It received airplay on a number of radio stations and the opening track 'Why didn't you want me?' was a finalist in the Rock category of the 2013 'MusicOz Awards'. She released her second EP ‘Heart’ in 2016. 'Heart' contained 4 new tracks including the single 'Breakdown'. It received airplay on radio stations across Australia and internationally and made the top 100 Triple J Unearthed Charts. Three of the four tracks were also shortlisted in the 'Songsalive' song competition. In April 2021 Cassady released her debut album 'One track mind' which features 8 new original tracks as well as a bonus acoustic version of a track. The album follows the release of the first two singles 'You' and 'Drowning' which have been receiving radio airplay, positive reviews and made the high 30s of the Triple J Unearthed Charts. Cassady's music is largely pop rock / country rock / rock ballads. It has a focus on strong melodies, rhythm, lyrics and instrumentation. It is modern and catchy but rooted in the authentic feel and blues of her upbringing. Her influences include the Rolling Stones, Powderfinger and The Divinyls.