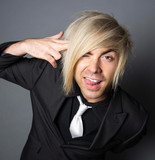 Featuring Morning in May

Morning In May is the dire vocalization of our inner psyche. A band set on a peculiar approach to navigating oneself with controversial lyrical value, conditioning emotions, and existential stimuli. Morning In May has shaped and owned their role in the world working with a list of heavy hitters, putting out early workings featuring vocalist Garret Rapp of The Color Morale, working and writing closely with Justin Marrow (Ice Nine Kills, Motionless in White). The band are no strangers to putting in the work with consistent touring and recording which landed them spots on The Vans Warped Tour and Launch Music Conference. Extremely high energetic live shows fuel the band’s captivating reach. Whether it be swinging from the rafters, jumping off stage speakers, or just plain flailing, every foot of the stage acts as a channel for interpretive dance to further convey the trapped selves, desperately trying to escape. Thanks to the band’s live shows and heavy hitting music, Morning in May signed with Needful Things Records (distributed by Tragic Hero Music Group through Warner ADA) in August of 2019 to begin a new chapter in their career. The band’s first single, “At Least I Still Have My Personality,” is a clear statement on the musical direction the band is headed, full of dark and theatrical twists and turns.