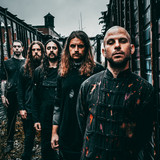 Reading, Pennsylvania's Rivers Of Nihil have never fit neatly into a box, but with 2018's "Where Owls Know My Name", they transcended all labels applied to them. Returning in 2021 with "The Work", they have forged further into new territory, delivering an album that is as cerebral as it is visceral, and that covers a staggering sonic range, definitively placing them in a category of their own. Adds Adam Biggs, "It spans a lot of different styles, ideas, and emotions. The twists and turns are pretty drastic for your modern day metal record. There's a lot of what you already know we do, and a lot of what you've never heard us do before."There's no denying that the finished product is something unique and marks the beginning of an exciting new chapter for Rivers Of Nihil, though Biggs states he has never gotten anywhere by thinking about the future of the band. "We always just sort of do this thing and it grows. I guess that could change at some point. But thinking about things that way doesn't seem to get me anywhere either. Better to focus on the work in front of us, as it turns out," he adds, referencing the album's title. "If we've learned anything for certain in the last year or so, it's that the future can be murky, we're not really owed anything, and it can all be taken away any second. But for now, we press on."