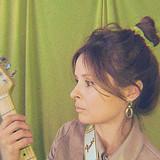 Originally from the Liverpudlian district of Wavertree, Katie Foulkes, the woman who is Delta Maid, grew up surrounded by an eclectic mix of musical genres and styles. During her childhood, she was influenced by artists such as Hank Williams and Sam Cook. Then, in her early adolescence, following the discovery of artists such as Bessie Smith, JB Lenoir and Sister Rosetta Tharpe, Delta Maid naturally developed a passion for all that is Blues, Jazz, Soul, Gospel and RnB. The influence of these artists and styles has shaped Delta Maid’s unique expression of her sensitivity and emotion. At the age of 23, after being noticed on Myspace, she signed a publishing deal, followed by the release of an EP in 2010 and an album with Geffen in 2011. She also collaborated with Ed Harcourt (‘Make Up Your Mind’) and Natalie Hemby. The latter led to a number one record on the US country chart with the Little Big Town’s ‘Tornado’. She has toured with Ron Sexsmith, opened for Ray Lamontagne and Martha Wainwright, The Coral, and notable others. After a nine-year hiatus, Foulkes released her sophomore album ‘Katie’ in June 2020.