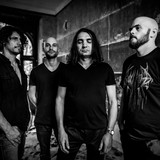 Meaning « mix » in Spanish, Mezcla breaks the rules with his death metal tinged with flamenco. Influenced by the singer-guitar player’s hispanic origins, raging riffs and growling voice in Spanish are mixed with rhythms and harmonies from Andalusia. The band never stop to experiment with this audacious mix, by developing two sides in his style. At first, the electric version from his beginning that the band supports on the albums « Salir sin pagar » and the well-received Metalmorfosis (released on the label Music Records). But there is also an acoustic version, more focus on the flamenco side with acoustics guitars and percussions, represented through two albums : ¿La Victoria de la Vida? and Arena Roja. Mezcla offers his fans new compositions and rearranges his previous metal songs with a new perspective, more than a simple « unplugged » version, accompagnied in live by the flamenco singer Catalina Gimenez and the dancer Sophia Sena. After having been playing with bands such as No Return, Hypno5e, Impureza, Lofofora, Klone or Patrick Rondat, the band is currently preparing his fifth album with HK at Vamacara Studio, after working with Frédéric Leclercq (Kreator, Loudblast, Sinsaenum…) on pre-production.