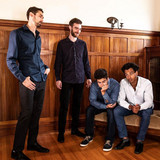 Jérémie & The Delicious Hounds are a new-age funk/blues/soul band with a bilingual twist. All band members are from the old French quarter of St Boniface, Winnipeg, the largest French speaking population in Western Canada. They cemented their identity as a quality bilingual act with their unique French and English double-EP released in late 2017. As a result, they earned a nomination for 2018 Western Canadian Music Awards “Francophone Artist of the Year". Then for "Group of the Year" and "Discovery of the Year" for the 2019 “Gala Trille Or” organized by the APCM where they performed at the nationally televised award show in Ottawa. They have since toured from BC to Quebec and been featured multiple times on many of UnisTV’s national French television programs. In the fall of 2018, the group represented Manitoba in the Chant’Ouest competition in Vancouver and was selected to represent Western Canada at the prestigious “Festival international de la chanson de Granby” in Quebec in 2019. Other notable performances include the New Year's Eve celebration at Victoria’s Inner Harbour (Canada 150), Festival Fête Fransaskoise in Saskatoon and Wapiti Festival in Fernie, BC. Given the quality of their live show and their upcoming album that is currently in the works, J&TDH is looking forward to a bright future without being stuck in quarantine.