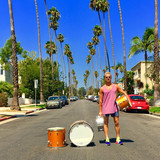 Drummer Anton Eger spent five years studying at The Rhythmic Music Conservatory in Copenhagen between 2003-2008. He is the son of a Norwegian father and Swedish musician mother and raised in Norway, Romania, Venezuela and Sweden, and now lives in Copenhagen, Denmark. As a teenager Anton played the cymbals in a marching band, developed an interest in classical percussion and started his first punk band. After a year serving as a military drummer in His Majesty’s King’s Guard in Norway, he hungered for new territories, and jazz and rhythmically complex music became a major part of his life. He has since toured the world performing both contemporary jazz and stadium rock, with a foot firmly planted in both worlds.