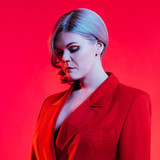 MIMRA, the solo project of María Magnúsdóttir, first captivated audiences with her eclectic and vocally enchanting music in 2014. Ever since she has created rich sonic layered music with delicate but complex blend of alternative folk-pop with a pinch of electronics, jazz and soul.

Radiating with strength and passion, MIMRA awes with a magical vocal dexterity and range. Released to critical acclaim both within Iceland and abroad, MIMRA’s debut album „Sinking Island” saw daylight in 2017. Self-recorded, produced and mixed by the artist, the album was part of María’s studies at Goldsmiths, University of London, where she mastered her technical skills and knowledge of popular music. MIMRA is currently working on songs with other talented producers such as Stefán Örn Gunnlaugsson and Zöe Ruth Erwin. The latest single, entitled „Right Where You Belong”, was released in January 2020.