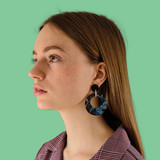 Esme grew up in Merseyside, UK and has always had a love of writing. She started out writing poems and stories which eventually turned into songs. As a teenager she was encouraged at open mic nights in Liverpool and it was here that she found her love of performing live. She is currently exploring topics of mental health, loneliness and self-acceptance in her songwriting, complimented with intricate guitar work and emotive vocals. Esme released three singles in 2020 which all gained airplay through BBC introducing. Her first single "Say the Words was played on Jazz FM by legendary radio DJ David 'Kid' Jensen who referred to Esme and her music as "something special". Esme has gigged across the country and has supported a range of artists including Dom Martin, Siobhan Wilson and Miles Hunt from The Wonder Stuff. “A rare quality of song writing craftsmanship”- Klee Music “Bridie has all the originality that a young artist should have and wisdom to put her seniors to shame”- Gigsoup