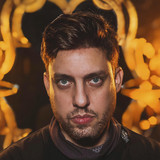 Spain-based producer Eric Estornel initially reserved the name Maceo Plex for his festival-friendly house productions before gradually taking the project into a darker, more introspective direction. After establishing himself in the techno world for his work as Maetrik beginning in the early 2000s, and exploring more abstract electro and IDM as Mariel Ito around the middle of the decade, he began releasing some of his most accessible tracks under the Maceo Plex handle starting in 2009. Over the course of the following decade, the project evolved from deep, sexy house with prominent Chicago and Detroit influences (such as on debut full-length Life Index) to a significantly more dramatic sound (particularly the ambitious Solar). In addition to releasing singles and full-lengths on well-regarded labels such as Crosstown Rebels, Kompakt, and Minus, Maceo Plex has mixed volumes of the DJ-Kicks and Fabric series. Estornel was born in Texas in 1978. Raised in Dallas, his family moved to Miami when he was a teenager. He started DJ'ing in 1993, and by the end of the '90s he had begun making music, releasing techno and electro tracks under names such as Eric Entity and Tali Wackas on a short-lived label called Illmatic Records. He started releasing music as Maetrik in 2001, and instantly made an impact on the tech-house scene, with EPs and full-lengths on labels like Treibstoff and Iron Box Music. He launched his more experimental alias Mariel Ito in 2005, releasing the full-length My Cyborg Depths on SCSI-AV and the Indexed EP on Modern Love. In late 2009, Estornel released a digital EP titled Clubs, which was co-credited to Maetrik and Maceo Plex. After moving to Valencia, Spain in 2010, he began concentrating on the Maceo Plex moniker, as well as a more soulful house sound. "Vibe Your Love," a cover of Stevie Wonder's "For Your Love," was released by Crosstown Rebels in 2010, and quickly became a club hit. This set the stage for the 2011 full-length Life Index, which was also a success, and Estornel began devoting much more time to his work as Maceo Plex. His subsequent EPs, such as 2012's Space Junk and several Conjure releases, took on a much darker, more sci-fi-influenced tone, but generally remained club-friendly. Following his 2013 installment of !K7's DJ-Kicks series, he began working on an ambitious full-length titled Solar. The 2015 12" Solar Sampler included the epic "Solar Detroit," which became one of his biggest tracks. The 2016 EP Journey to Solar set the stage for 2017's Solar, a more introspective, vocal-heavy full-length inspired by his marriage and fatherhood. His second commercially released mix CD, Fabric 98, appeared in 2018. ~ Paul Simpson, Rovi