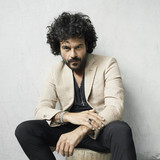 Before embarking on his solo career, singer/songwriter Francesco Renga spent 13 years with the band Timoria, whose first incarnation had formed when the members were still in high school. After releasing seven albums with them, Renga decided he wanted to strike out alone, releasing his solo debut in 2001. The self-titled album appeared on Universal, the label that also housed Timoria. The same year, he entered one of its songs, "Raccontami," into the San Remo Festival, where he won the critics' newcomer award (alongside Roberto Angelini), thanks in part to his stirring live performance. In 2002, Tracce came out, followed by Camere con Viste in 2004. In 2005, Renga once again appeared at San Remo, this time to even more favorable results: his song, "Angelo," took first place at the entire festival, prompting a re-release of Camere con Viste with the bonus inclusion of the winning composition. In June 2007, Renga issued a single, "Cambio Direzione," in anticipation of the upcoming full-length Ferro e Cartone, set to appear in October of the same year. It became Renga's first number one album in Italy, and 2009's string-laden Orchestra e Voce charted high as well. Renga's career appeared to level off during the 2010s, with albums such as 2010's Un Giorno Bellissimo and 2012's Fermo Immagine remaining outside the Top Ten. With 2014's Tempo Reale, however, Renga not only returned to the top of the Italian charts, he remained in the Top 20 for six months, driven by the hit singles "Vivendo Adesso," "Il Mio Giorno Più Bello nel Mondo," and "A un Isolato da Te." Two years later, his 2016 album Scriverò il Tuo Nome returned Renga to the peak position in Italy. ~ Marisa Brown, Rovi