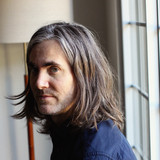 Daniel Hart is a composer and performer based in Los Angeles. Hart made his feature film debut in 2013 with the critically acclaimed Ain't Them Bodies Saints, which began his collaboration with filmmaker David Lowery. Hart has composed the music for all of Lowery's films, including Pete's Dragon, A Ghost Story, Old Man and The Gun, and 2021's The Green Knight. Over the past decade, he has also scored multiple TV shows, from Fox's The Exorcist, to SMILF, to The Society. Hart has written music for This American Life, and composed the score for S Town, one of the most popular podcasts of all time. Hart's musical career started on the road, as a hired gun for bands such as St. Vincent, Broken Social Scene, Other Lives, and The Polyphonic Spree. He continues to work in this field, having recorded strings for St. Vincent's 2021 album Daddy's Home, re-arranging songs for Anjimile's latest release Reunion, and writing new music for his own band Dark Rooms, which has released two albums, and toured extensively throughout the US and Europe over the past eight years.