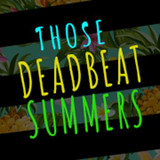 The band who defined the sound of Indie Post-Prime Dad Rock, Those Deadbeat Summers. AJ Perry (vocals, guitar) and Mike Langford (bass, drums) are two dudes who've been recording music together and separately (The Sole Pursuit, Deadset Society, Tense Machine) for over a decade. They decided to officially join forces on a project that embraces their love of 80’s and 90’s culture, video games, sci-fi, and day-to-day adult life. Formed in the summer of 2018, the idea was to quickly write and record a collection of punk rock songs about "life". Two weeks later, their debut EP ‘502’ was uploaded and released. A few months later Mike and AJ released their first full-length album 'Go For Broak' in the Fall of 2018. They say write about what you know, and when you wake up to realize you're a western world 30-something, there's a lot of topics to choose from... that for better or worse, will hit close to home. “Real life, real lyrics, that zero in on real things.” - Those Deadbeat Summers