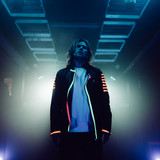 DANNY - Lighthouse – New Single – Something between Stranger Things, Super Mario & Tron. Lighthouse is the 7th Studio Single in 2021 of Artist DANNY. 5 years ago, Danny went on a backpacker Trip for one month while being homeless. As he said it was a turning point in his life as a musician and while getting through a tough time, he wrote down the first lines which become later his brand-new song Lighthouse which is a mix of 80s pop filled with electronic elements and traditional singer songwriter music. 2020 Danny went on an Arena Tour in Germany during the Lockdown Time to play concerts via Livestream for his Fans. Many Artists, the culture scene and tv, radio, magazines and press reported about his unique action. Landing Page: https://linktr.ee/dannyofficialmusic