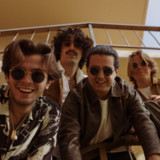 Hailing from the backyards and garages of Orange, California, North Morlan is an up-and-coming band with a nostalgic yet modern sound. With grooves so inconceivably infectious, even the cops coming to shut down their DIY house shows were caught bopping their heads. North Morlan breathes new life into the alt-rock genre with their sunny melodies married to sweetly seductive rhythms. “NOMO” fans have said their sound, dubbed “Alt Groove Rock,” is similar to the Red Hot Chili Peppers, The Strokes, Phish, and The Backseat Lovers. Having played more than 50 shows in 2 years regionally touring as full-time students, North Morlan has supported The Mowgli’s, NoMBe, Hot Flash Heat Wave, Ginger Root, and Arms Akimbo. With a strong local pull, North Morlan headlined the Moroccan Lounge, the Wisdome LA, and played a sold-out crowd at the Constellation Room. With their debut album released on May 14th, North Morlan is making a bold statement laying claim to a rich re-imagination of the Alt-Rock genre. Drawn together through a deep love of music and storytelling, Jason MacMillan, Naveed Farhadi, Jack Kimber, and Noona are architects of an electric live experience. A NOMO show is akin to a bonfire on the beach, singing and dancing with your closest friends. Their message is clear: have a good time and surround yourself with those you love. With love, NOMO