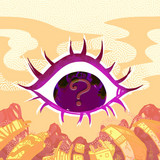 Behind Astral Bazaar there are six Finnish individuals, dedicated to making music that breaks the boundaries between traditional genres. The band plays an exotic blend of progressive and psychedelic rock with hints of jazz and various types of world music here and there. Through several years of touring around Finland, Astral Bazaar has become known for their light-hearted and goofy attitude as well as the lengthy and frisky jam sections that form a central part of their live shows. The band's debut album, Pictures Unrelated, was released in 2018. The songs on the album were made by putting together elements from progressive rock with more commercial ingredients like catchy riffs and poppy choruses. The end result was an album positively reviewed by the Finnish media and well-received in the international prog rock community. Encouraged by the positive feedback Astral Bazaar started working on some new material for a second album in early 2019. It was soon decided that this would be a concept album situated far in the future. The lyrics were written from the perspective of a narrator, who desperately tries to seek explanations for the bizarre events that take place in the world around him. While making the album, the band spend a good deal of time experimenting with different kinds of guitar and vocal effects. As a result the album has an even more psychedelic and experimental sound compared to its predecessor. The album - entitled A Sudden Realization - is out NOW!