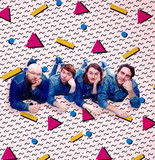 Millennials. You know them. Eating their avocado toast and drinking their fancy coffees. Shouting from the rooftops how woke they are and thinking they deserve big important jobs fresh out of college.   MILLENNIALS are however, also a band from Amsterdam, The Netherlands. Both witty and gritty, their sophomore EP titled 'Are You Sure?' tells stories of wimpy millennial struggles as well as fighting off the very same thing. Their spirit animal, come to life in the song ‘It's About Time', is a Polish cow that escaped his farm and joined a herd of wild bisons that roamed the plains. In some way like any other millennial discovering him- or herself in sleeping dorms around south east asia, only way cooler. Hailing from Amsterdam these four indie rock gods play songs that burst with life and energy. They are defined by jangly guitars, hook-heavy melodies and a bold sense of songwriting. Pop songs how pop songs are meant. With verses and choruses.