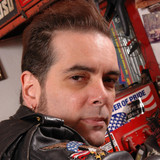 National recording artist JEFF VITOLO (a nominee for the TAMPA BAY MUSIC HALL OF FAME) is known for being in some of the best bands from the Tampa Bay area, of which some have reached national & international status.

From 1986 to now JEFF VITOLO has been a staple on the Florida music circuit and has also traveled the country from coast to coast performing at many famous music venues including CBGB in New York City, THE VIPER ROOM in Los Angeles, THE CONTINENTAL CLUB in Austin,TX. and many many more great venues in between playing in bands including