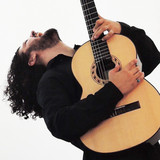 Aaron Larget-Caplan is an international recording and touring guitarist, who has premiered over 80 compositions, founded and directs ¡Con Fuego! a Spanish classical music & flamenco dance trio, and had his groundbreaking arrangements and recording of the music of John Cage issued by Edition Peters and Stone Records (UK). He has four critically acclaimed solo discs, and he is on faculty at University of Massachusetts Boston and formerly Boston Conservatory. He recently received the Médaille D’Etain from the Société Académique Arts-Sciences-Lettres of Paris, France for his trailblazing work in music, and was Musician in Residence at the Banff Centre for Arts and Creativity in 2019 & 2020. He lives in Boston with his wife, healer and music, Catherine, and really likes espresso.