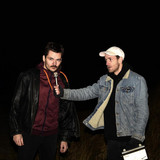 …plays fast rock from the dark side of the 80'ies. It's a noisy and pop-punk'ish soundscape. The core of the band consist of Lauritz Carlsen (Vox, guitars) and David Tholander (Bass, Drummachine) and PBSM shaped when the two childhood friends began a long distance songwriting relationship between Berlin and Copenhagen for a period of 1,5 year. During this time the Berlin crowd around the 8mm bar (incl. bands such as The Brian Jonestown Massacre, Spacemen 3, Kadavar, The December Sound, Blue Angel Lounge, Cavern of Anti Matter) and a love for psych and krautrock, formed the band and the songs from the start. Now the band is working out of their studio in central Copenhagen where the songs are written and recorded. The music is predominantly up-tempo rock and draws inspiration from bands such as: BRMC, David Bowie, The Sound (UK) and Billy Idol.