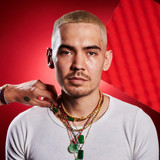 was born in South Florida, Miami to be specific. Adopted shortly after his birth, him and his family moved to a small town in Pennsylvania where he was raised by parents who encouraged him to pursue whatever he loved - it just so happened to be writing….and rap music in particular. Charles developed his skills early on, releasing his first solo “album” at the age of 15. It was far from a masterpiece, however it solidified an already strong belief that music was his calling; shortly after, many more people took notice. After touring the country multiple times and recording songs with the likes of G-Eazy, Action Bronson, etc. Alexander decided to embark on his most ambitious project yet - 52 Weeks. In short, Alexander announced that he would record a song as well as film an accompanying video EVERY week of 2018. Each video was released on his YouTube channel and various social media platforms while each song was released on an E.P named after the month in which it was released. All said and done, Charles released 52 music videos in one year to go hand in hand with the 12 short form albums he put out at the end of each month. After an overwhelming year, the turbulence did not stop for Alexander as a monumental event that occurred at the beginning of 2019 would go on to inspire Charles’ highly anticipated upcoming album, Fortune Cookies.