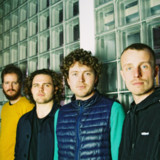 The sound of danish quintett Abekejser works pretty similar to the eclectic playlists of young digital natives – no one really cares about genre boundaries anymore, as long as the ingredients are fun: Heavy Hip Hop Beats meet gnarly synth sounds, reverb-drenched Rockguitars and a room filling bass. The result is a highly danceable cocktail of Jazztronica and Neo-Soul, whose catchy melodies and hooks reveal their complex structures only after several listens. Their debutalbum „Floating Through The Universe“ (released in October 2019) is making more and more waves on the scandianvian and UK Jazzscene and with a reputation of regularly turning live shows into euphoric happenings. Abekejser was founded in 2015 in the danish city of Aarhus. The five young musicians with a background in Jazz and World-Music knew each other through their memberships in several other formations when they finally decided to combine their individual ideas through a common musical vision. From the start it was obvious that the sound of their new musical venture needed to be „here and now“ as much as channeling the personal preferences of each band member. The musical approach was deliberately electronic from the get go in terms of Instrumentation as well as production – so they created an urban universe between jazz, beats and electronica that shares some musical ground with bands like Snarky Puppy, Jaga Jazzist or Robert Glasper, but follows its very own rules by doing so!