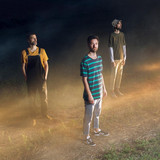 Tailor for Penguins’ comeback after a few years of silence is a series of singles made with love and care from their home studio in Barcelona. They are back to work doing what they do best: good beats and catchy melodies, talking about their own experiences and always aiming towards putting a smile on the listeners’ faces. The band published his first album “When We Were Older” in 2016 and went on the road next year to tour around Spain, hitting several venues and festivals around the Penninsula. They even got a couple of their songs to appear on TV ads. In 2018 they started working on their second album, which never saw the light of day for several reasons, but the making of which meant a lot to them: they learned from their mistakes and grew creatively as a team. After a period of rethinking and relocating their selves; who they are, what they want and where they’re going, they come back with a collection of self-produced gems that will definately be appreciated by old followers and the general public alike. Listen to their music. They have something to say.