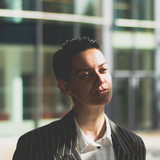 Jealous of the Birds

Featuring Jealous of the Birds

Jealous of the Birds – the musical moniker of Northern Ireland-based singer-songwriter Naomi Hamilton – has earned worldwide critical applause for her resonant lyricism and surprisingly volatile musical approach. Hailed by NPR for her “remarkable gift for converting spare and common ingredients into a sound that’s utterly her own.” PENINSULA, Jealous of the Birds’ new album, now sees this artist expanding her welcoming, deeply thoughtful songcraft. A poet and painter, songwriter and musician, Hamilton has crafted an evocative work of creative contrasts, combining spellbinding sonic turbulence and dramatic lyrical depth. Songs like “Something Holy” and the anthemic, optimistic “Pendulum” traverse the space between naïveté and experience, their themes enhanced by enveloping atmospherics and dynamic arrangements. “I feel like there are extremities to being a completely isolated individual and to being completely dependent,” Hamilton says, “whether that’s on other people, on a system, on labels, on whatever you want to be dependent on. PENINSULA encapsulates the idea that you can have some sort of autonomy but also be connected to others; you can be connected to something bigger than yourself while still having some sense of independence.”