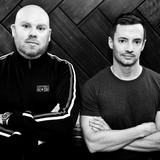 Southlight is the Tasmanian-based house music project of Andrew Young and Damien Goundrie. Southlight’s music reflects broad influences - from disco to techno, soulful to electronic. Returning from the Sydney dance music scene where they played Parklife, headlined NYE at Cafe Del Mar, Hed Kandi, Goldfish, Ivy (to name a few), Southlight have returned to their studios in the wilds of Tassie where Andrew and Damien have been busy working on the Southlight debut album