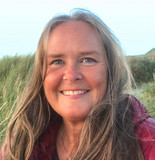 In 2019 she recorded songs in her childhood dialect: Fredag før pinse and Hinna. The album Stille sanger (2017), was Anette Giljes debut as a singer/songwriter. In 2018 her album was translated into English, Songs of Silence, German, Leise Lieder and Spanish, Canciones Serenas.   For twenty three years Anette Gilje has deeply missed being able to listen to music. When the sound of bubbling soda water is perceived as noise, and the crunching of crackers resembles the sound of a stone-crushing plant…then, even ones favorite music becomes unbearable. At times Gilje have managed to listen to half a song, at low volume. Apart from this she has lived alone in silence…in a room where thought was absent and feelings defied definition. Slowly but surely her strength returned. She began day-dreaming. Almost imperceptibly the hope was aroused in her that she could discover some meaning in these costly experiences from this landscape of silence. From her horisontal view-point on the sofa, she saw how music and words began to find each other. With a little help from her guitar, 12 short ”Songs of Silence” were born… «Written for those of us who, in truth, cannot bear to listen to music. But who are all too aware of how much they miss it.» She has also recorded two singles in four languages: Kanskje var det det du ville, Maybe this is how you planned it, Hattest du das so im Sinn, Quizá es así como lo has querido and Lavmælt jul, A just noel, Weihnachtswunsch, Navidad silenciosa