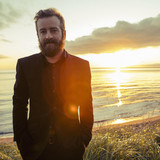 Playing a full-bodied, emotionally resonant brand of Americana-infused indie rock, Dead Man Winter is a group led by Dave Simonett, best known as one of the founding members of the progressive bluegrass group Trampled by Turtles. Formed in Duluth, Minnesota in 2003, Trampled by Turtles began as a side project for Simonett and his bandmates. So when Simonett started working up songs that demanded a more muscular attack than TbT would ordinarily deliver, it came as no surprise that he started another group to perform them. Released in 2011, Bright Lights was the first album from Dead Man Winter, which Simonett identified as his rock & roll project; the album also featured two of his Trampled by Turtles bandmates, fiddler Ryan Young and bassist Tim Saxhaug. In October 2016, Trampled by Turtles announced they were going on hiatus, as Simonett was dealing with the emotional fallout of a contentious divorce. Simonett used his downtime to work on more personal material that reflected the changes in his life and career, and this material became the basis of the second album from Dead Man Winter. Featuring Simonett on guitar and vocals, Erik Koskinen on guitar, Tim Saxhaug on bass, Bryan Nichols on piano, and J.T. Bates on drums, the new edition of the group spent a week at Cannon Falls, Minnesota's Pachyderm Studio recording Furnace, which was released in January 2017. Dead Man Winter announced a North American concert tour in support of the album, running from February to April 2017. ~ Mark Deming, Rovi