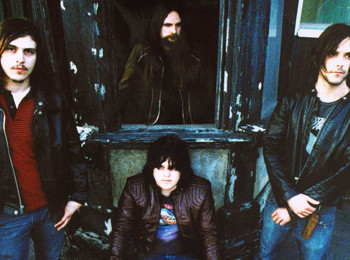 Montreal's Priestess build upon the fury of AC/DC and Black Sabbath for their own new-millennium headbanger blend of '70s Camaro rock. Mikey Heppner (vocals/guitar), Mike Dyball (bass), Vince Nudo (vocals/drums), and Dan Watchorn (vocals/guitar) formed Priestess in 2003. Heppner was playing with punk act the Dropouts at the time, and when three of its members headed to New York to form the Stills, Heppner was left to his own devices. In late 2005, Heppner and co. released their debut album, Hello Master. The fiery rock set was issued via Indica in Canada and on Ace Fu in the U.S. A major-label recording contract with RCA followed in January 2006. North American tour dates opening for Dinosaur Jr. followed that spring. A remastered version of Hello Master arrived in June, and additional shows with the Riverboat Gamblers and the Bronx coincided with its release. In February of 2010 their follow-up album, Prior to the Fire, was released in the U.S. on TeePee Records. ~ MacKenzie Wilson, Rovi