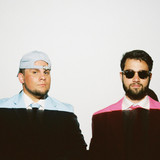 Hailing from Atlanta, GA, Vodka Milk was born in January of 2020 — right before the world decided to shit itself.   With a name that might seem like a complete joke to some, there’s a lot more behind the true meaning of Vodka Milk. All you have to do is listen to the music.   What makes the Pop/EDM duo unique is not only the powerhouse vocals and lyrics from the naturally gifted, Eddy Fasone, but their ability to expand on just about every sub-genre of Pop and EDM. Part of this comes from the brain of co-producer and DJ, Justin Albano (Jut).   From a tropical moombahton track like “Bombay” (feat. Remy Lazarus), to an Illenium-esque “Overdrive”, and a speaker-thumping “Sleeping With the Devil”, the two held back nothing on their debut album “Heartbreak Fever”.   While Jut and Eddy might debate "who's vodka and who's milk" for the rest of their lives, the decision is ultimately up to you.