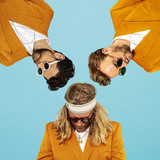 The eclectic hip hop group that has been described as a Swedish gem with an international audience have managed to reach a target group as wide as the repertoire. Over a decade of touring around the world testify to their global success, especially remarkable since they have never abandoned the Swedish language. After the breakthrough in 2008 with the album “Äppelknyckarjazz”, they got noticed by the American television program “The Colbert Report”, which invited them to play on the show. The performance became a sensation and shortly thereafter, Movits! was ranked number one on the US iTunes hip hop chart, and the band set out on their first US tour. Three years later, they released the album “Ut Ur Min Skalle”. Once again, Movits! found a new way to define hip hop through bombastic productions interspersed with influences from jazz, soul and rap. In 2013, they released their third album “Huvudet bland molnen”, and two years later followed up with “Dom försökte begrava oss, dom visste inte att vi var frön”. With these releases, the band continued touring non-stop between 2013 – 2017 across three continents, adding Asia to their itinerary. Since their debut, Movits! has made a journey musically, from the jazz-inspired hip hop to a more dynamic and organic soundscape. Still staying true to everything that characterizes the band’s signum of horn arrangements and heavy beats – with music that never rewinds and digs into the past to tell something new.