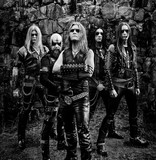 Swedish death metal band Necrophobic were formed in 1989 by drummer Joakim Sterner and guitarist David Parland. The pair played with a revolving-door lineup of musicians before the permanent addition of guitarist Martin Halfbahn prior to recording their debut album, The Nocturnal Silence, in 1993. Following the addition of vocalist/bassist Tobias Sidegard, Necrophobic released the four-song Spawned by Evil in 1996 as a teaser for the full-length release Darkside, which bowed later that same year. Third Antichrist was released in fall 2000 through Black Mark Records, but it marked the fourth release from the group to be mishandled by their U.S. distributors. A switch to Hammerheart Records led to Bloodhymns, the first of their traditional death metal releases to see American shores through the label. Hrimthursum arrived in 2006 via Regain Records/Candlelight USA, with the critically acclaimed Death to All dropping in 2009 -- Satanic Blasphemies, a compilation of the band's early material, was released the year prior. Necrophobic continued to flex their blackened death metal muscles in 2013 on the full-length Womb of Lilithu, and again in 2018 with the release of the triumphant Mark of the Necrogram, their first outing for Century Media. ~ Jason Ankeny, Rovi