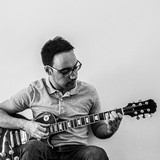 Elezeta started as an exploratory project to learn to produce music at the beginning of the 2020 pandemic. It first revolved around recording a couple of children's songs in Spanish, and finalizing and publishing some previously composed piano or synthesizer pieces. Album through album, it converged to indie rock in English by mid 2021. Elezeta composes and writes his songs, plays the acoustic guitar/electric guitar/bass guitar/ukelele/piano/other instruments, records, produces, and publishes his albums. Luis Quesada Torres, the artist leading Elezeta, was born in Granada, Spain, in 1985, studied Computer Science, and lives in Zürich, Switzerland, since 2014, where he now works as Engineering Manager. His hobbies are music, languages, video games, virtual reality, science fiction, sport, and teaching.