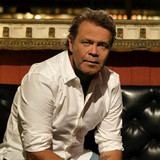 Troy Cassar-Daley has released 11 studio albums throughout his thirty years of making music. He is a proud Gumbaynggirr/Bundjalung man who comes from a long line of storytellers and shares his musicianship with so many artists across different styles of music. Troy’s latest album – The World Today – released March 2021 has been touted as his best album yet, debuted at #1 on the ARIA Country chart, #1 on the ARIA all Australian chart and #3 on the overall ARIA chart, Troy’s highest solo chart position in his career. His passion to pen stories about this land and what lies at the heart of it has been a driving force in his career. Troy has been awarded numerous accolades including 37 Golden Guitars, 4 ARIAs, 3 APRA Song of the Year awards, 9 Deadlys (Australian Indigenous Artist Awards), 4 CMAA Entertainer of the Year awards plus 2 NIMAs (National Indigenous Music Awards).

In 2017 Troy was honoured as the 50th inductee into the prestigious Australasian Roll Of Renown.