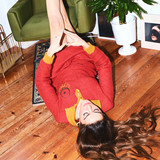 Hi, Emily Roberts here. Half Brit, half potato. In 2019, EMILY ROBERTS got together with GAMPER & DADONI for the The Verve remake of “Bittersweet Symphony”, which turned into a proper radio hit and in early 2020, she followed up with the pop anthem “In This Together”. The track conquered the airplay charts and EMILY ROBERTS carried her British black humor into the networks of the nation. »I’m not the type to pick apart every little detail with my friends and have hourlong conversations. I prefer releasing my emotions through my songs which I put out into the world – and when I write lyrics, they’re 100% me in that moment.«   It’s just like EMILY ROBERTS to admit that she doesn’t have a plan b – compromises just aren’t her thing. From her first gig in a Hamburg coffeehouse, to pro-level life in Berlin, Emily writes unfiltered song-selfies that express what others just think to themselves. This tongue-in-cheek humor

can also be heard by the way, seeing as her new single BOYS THAT LOOK LIKE YOU tackles a topic no one has ever written about. The flip side of pretty privilege. Cause being outrageously handsome does not only come with advantages. Some of the most beautiful people are also some of the loneliest. Question-marks