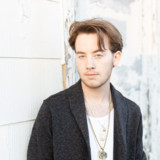 Quinn Sullivan is opening a new chapter of his already impressive career with the release of ‘Wide Awake,’ his new full-length album, out June 4th via Mascot Label Group. Just 21-year-old, the singer, songwriter, and guitarist has already toured the world, collaborated with rock’s biggest legends, and developed genuinely jaw-dropping skills as a guitar player. But now, as captured in the video for “How Many Tears,” Sullivan’s more recent work has been with pen and paper, as he lets the abundant skills of his youth blossom and steer him into new directions of artistry and creativity. “Sullivan has…come into his own, not only as a fiery guitar player but also a singer-songwriter,” reports Relix. It’s the next step for the ambitious musician with a constant view towards the future, marking Sullivan’s evolution into the singer-songwriter genre while still effectively highlighting his guitar mastery. ‘"How Many Tears" is a reflection of how I was feeling about love and relationships back in high school,” Quinn said. “I had thought about myself during those times and I’d see so many guys treating girls so horribly, so I never understood why those girls would always go after those types of guys. I had never written a song about this subject before, but it just felt honest and comes from a very real and genuine place, which is why it’s one of my favorite songs on the new album.