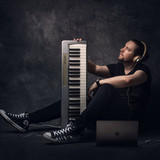 Have you ever heard of the concept “soundtrack artist”? That is what people have said about Elias. Being in love with movies and New York, Elias wants listeners to explore his world of cinematic R&B/Pop, combining urban vibes with acoustic piano soul. Also known as Shy, Elias is a singer, songwriter and producer from Stockholm, Sweden who started out as an actor in well-known films and TV series - such as Ingmar Bergman’s “The Best Intensions”. During his school days he began playing drums, saxophone and piano, and eventually found his voice in singing. Elias has performed both on and offstage with various artists, while recently producing music for others. Radio station P3 picked up the song "Wu Girls" from his debut album "4 CLUBS AND HEARTS" when he was chosen as Artist of the Month. During this time Elias also competed as 1 out of 16 finalists on Swedish American IDOL.   “Extroverted and sparkling soul/funk for the 21st century” (P3)  “...sounds very internationally viable” (Skivkoll.se)  “A voice smooth like velvet...” (GAFFA)  “...doctorate in music” (Andreas Carlsson)  ”Timeless and flawless” (J.Axl, DJ)